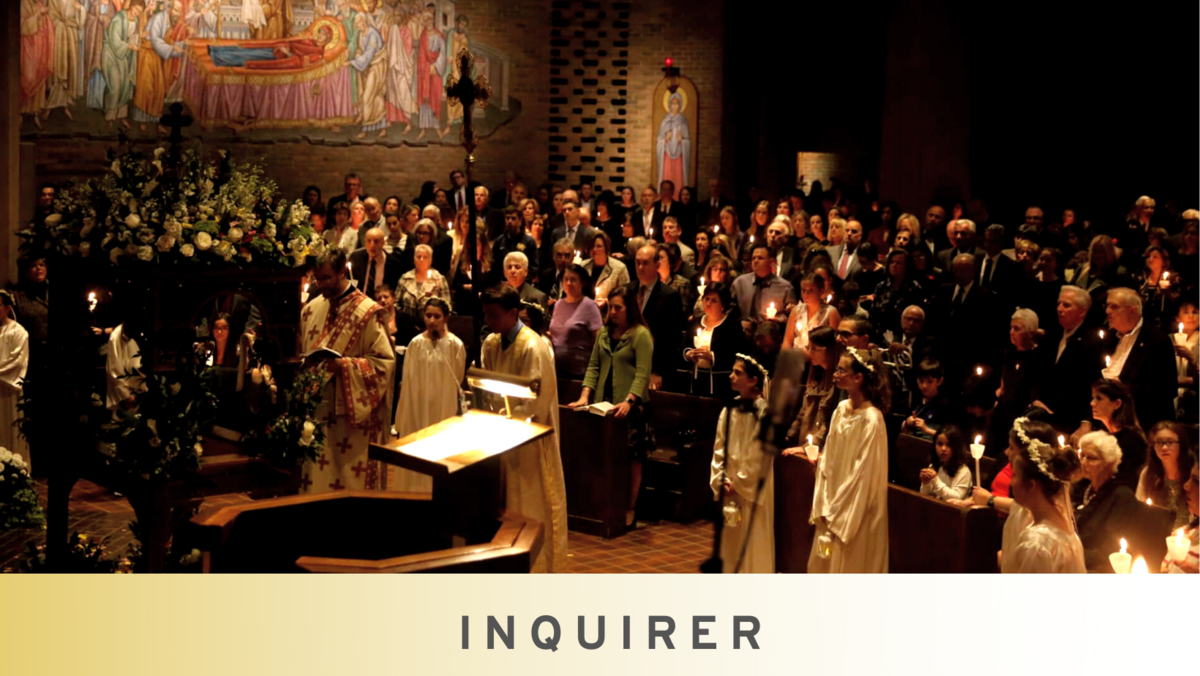 Are you interested in becoming Orthodox and learning more about our Faith? Below you will find information regarding the beliefs of the Orthodox Church. This is not an exhaustive list but should better help those seeking to understand the Orthodox Faith in all its vibrancy and beauty.

We believe in God the Father, Who is without beginning, indescribable, incomprehensible, Who is beyond every created essence, and Whose essence is known only to Himself, to His Son and the Holy Spirit. We believe that God the Father never became the likeness of any material form, nor was He ever incarnate.

In the theophanies (appearances of God) of the Old Testament, as our Holy Fathers bear witness, it was not God the Father Who appeared. Rather, it was always our Savior, the Second Person of the Holy Trinity (i.e., the Word or Logos, the Angel of the Lord, the Lord God of Sabaoth, the Angel of Great Counsel, the Ancient of Days) Who revealed Himself to the prophets and seers of the Old Testament. Likewise, in the New Testament, God the Father never appeared but bore witness to His Son on several occasions solely by a voice heard from heaven.

The Incarnation & the Holy Theotokos

From the moment of His conception in the virginal womb, Jesus Christ was one person yet possessed two natures. From His conception, He was God and Man before, during, and after birth. Through the Incarnation, the Most Holy Virgin Mary became truly the Theotokos, the Mother of God. We understand that she was a Virgin for the entirety of her life. She is the gate proclaimed by the Prophet Ezekiel through which God entered into the world "while remaining shut" (Ezekiel 44:2).

Orthodox Christians understand that matter is not co-eternal with the Creator, and there was a time when it did not exist and that it was created out of nothing by the Will and the Word of God. We believe that matter was created good (perfect) but corrupted because of human's choice to sin. God is the cause of all things and the end purpose of all things. From Him, all visible and invisible creatures have their beginning, and there was a time when they did not exist.

The creation of human beings and the universe was not out of necessity. Creation is the work of the free and unconditional will, out of love, of the Creator. If He had so wished, He need not have created us—the absence of creation would not have been a privation for Him. God has no need to be satisfied, as He needs nothing. God's love is a love that constitutes a mystery unfathomable to our reason or intellect. God has no "emotions" that would create passion, suffering, need, or necessity within Him. Although the nature of divine love remains incomprehensible and inexplicable to human reason, God's love is real and genuine—and in agreement with Scripture—that God is love and created us out of divine love!

Orthodox Christians believe that a person's natural virtue cannot save them and bring them to eternal life. The Scriptures teach: "And all our righteousnesses are like filthy rags." (Isaiah 64:6). Our work or fulfillment of the Law does not merit something from God. Without Jesus Christ, one's virtue, one's reputation, one's value, one's work, one's talents, and one's faculties matter very little. These attributes matter only insofar as they test our devotion and faith in God. We can do nothing without Christ.

Our faith in Christ is not an abstraction but rather an ever-present and deepening relationship with Him. This communion fills us with the power of the Holy Spirit, and our faith becomes a rich reality that produces good works in us as the Scriptures attest: "which God prepared beforehand that we should walk in them." (Eph. 2:10). Thus, according to the Apostles, faith produces true works and true works, which are the fruit of the Holy Spirit, bear witness and prove the existence of our true faith.

Faith is also a gift from God. When we rely only on our efforts, our own believed piety, or our own spirituality, we cannot truly possess this faith. Yet faith is not imposed by God. To those who desire it, God grants it, not because of fatalistic predestination, but because of His Divine foreknowledge and His disposition to co-operate with man's free will. If God has given us faith, we must not think ourselves better than others or be prideful of having such faith, nor should we believe that we have received it because of our merits—but we should attribute this favor to God's goodness. Therefore, it is neither works nor faith, but only the Living God Who saves us.

Orthodox Christians understand that the nature of the Most Holy Theotokos is identical to our own. She said "yes" to the Angel in accordance with God's plan of salvation offered to humankind. Scripture tells us that the Angel said, "The Holy Spirit will come upon you, and the power of the Highest will overshadow you; therefore, also, that Holy One who is to be born will be called the Son of God." (Luke 1:35). Thus, the nature of fallen humankind, which bore the wounds of sin and the marks of corruption, was restored to its former beauty.

And so, we praise and venerate, not worship, the Most Holy Theotokos as: "More honorable than the Cherubim and beyond compare more glorious than the Seraphim, incorruptibly you gave birth to God the Word. We magnify you, the true Theotokos."

Orthodox Christians believe that God is "wondrous in His saints" (Ps. 67:36) and that He is the "Savior of the body" of the Church (Eph. 5:23). We believe that we are saved, insofar as we are members of the Body, but that we cannot be saved by any personal relationship with God that exists outside of the Church.

The saints, then, are also members of the Church—the Body of Christ—who, while living, achieved great sanctity and perfection through the purification of the passions and God's great mercy. We believe that our God is the "God of our Fathers" (2 Chronicles 20:6) and that His mercy is also in part because we are the children of our Fathers who are the saints and His servants (as the Holy Scripture attests in many places).

We do not worship the saints but rather ask for their intercessions—prayers—to Christ on our behalf, just as we would ask our friends or family to pray for us. The saints were given grace when they were living, so imagine how powerful their petitions are now on our behalf?!

The Orthodox Church uses icons to assist in prayer and worship. Icons are 'windows to heaven.' They help us focus on divine things. While the icons still contain material aspects, like paint, we do not reject the physicality of our lives but instead transform our lives, as was done by the holy saints represented by the icons. It is important to note that the icons themselves are venerated only, not worshipped. We only worship God in the Holy Trinity (Father, Son, and Holy Spirit).

We, therefore, accept the Scriptures as a whole and do not choose bits and pieces according to our personal interpretations. The official versions and texts of the Orthodox Church are the Septuagint version of the Old Testament (which the Apostles used when they recorded the New Testament) and the Greek text of the New Testament. The Orthodox Church believes Holy Scripture was written through the Holy Spirit's inspiration and that it is solely through the Holy Spirit that we can read and understand it.

The Church and Ecclesiastical Order

Orthodox Christians understand the "Church" is of Jesus Christ and is One, Holy, Catholic, and Apostolic, and that God instituted it through the power of the Holy Spirit and revelation. We understand that one cannot separate Jesus Christ from His Church, which functions as His Body. The Orthodox Church is a body of autocephalous churches with a shared history, faith, liturgical and sacramental life. The head of the Church is, therefore, Jesus Christ.

The church's doctrines and teachings are expressed through Holy Scriptures and Holy Tradition—chiefly as it is contained in the laws and canons of the Seven Ecumenical Councils. Our faith has a deeply positive view of the human person and body, and is known for its sacramental approach to the world and vibrant and ever continual worship that intertwines with its deep current of mysticism. In the Orthodox faith, we consider ourselves to be in direct continuity with the Apostles of Christ and the saints of all ages. Holy Apostles Greek Orthodox Church is a parish of the Greek Orthodox Metropolis of Chicago and the Greek Orthodox Archdiocese of America. We are under the spiritual jurisdiction of the Ecumenical Patriarchate of Constantinople.

We are neither Catholic nor Protestant but rather represent a separate historical Christian path founded in the one true Church of our Lord and Savior Jesus Christ. We believe the Head of the Orthodox Church is our Lord Jesus Christ. The Orthodox Church has never had, nor shall ever have, a "universal" bishop. Please note a "primate" or an "Ecumenical Patriarch" is not a prelate with universal jurisdiction over the Church. The titles "patriarch," "archbishop," "metropolitan," and so forth do not denote a difference of episcopal grace. The unity of the Orthodox Church is expressed by Her bishops' harmony, common Faith, common Law, and common spiritual life.