Home » Our Faith » Types of Services 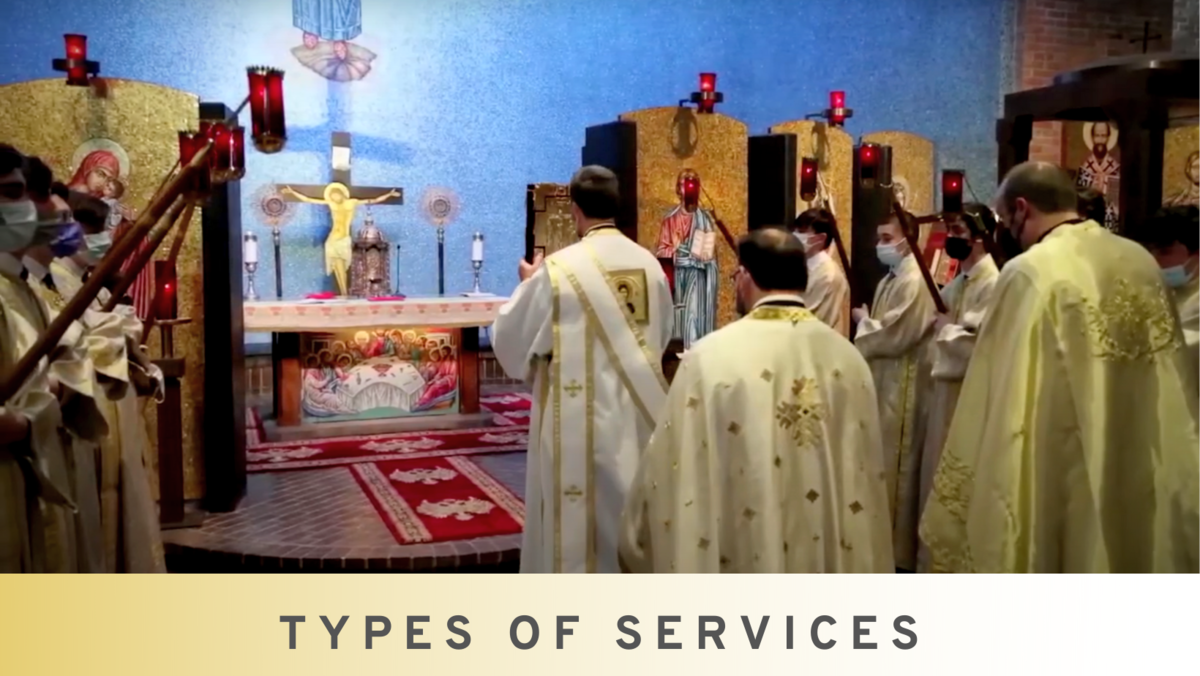 The Orthodox Church offers several specialized services and blessings, which reflect the continued spiritual needs and rhythms of our daily lives. These services speak to the presence and action of God and His love in our lives.

The Church also regularly offers blessings for individuals, events such as trips, and objects such as icons, churches, flowers, fields, animals, and food. In so doing, we offer our thanksgiving and affirm that nothing is secular or detached from God.

The following section is from the article "Special Services and Blessings of the Orthodox Church" by Rev. Fr. Thomas Fitzgerald.

The death of a Christian affects not only the family but also the entire Church, for we are all part of the Body of Christ. The Orthodox Funeral Service, which expresses this fact, is not to be seen primarily as an opportunity to extol, in a sentimental way, the virtues of an individual. Rather, the various prayers and hymns emphasize the harsh reality of death, as well as the victorious Resurrection of Christ through which the power of death is conquered. The Funeral Service comforts those who mourn; it is also the means through which the Church prays for one of its members who has died in the faith of Christ.

Orthodoxy views the end of physical existence only as the termination of one stage of life. God's love is stronger than death, and the Resurrection of Christ bears witness to this power. The Orthodox Funeral consists of three Services. First, there is a Vigil Service after death, which is usually conducted at the wake. This service is called the Trisagion Service. The Church prays to Christ "to give rest with the Saints to the soul of Your servant where there is neither pain, grief, nor sighing but life everlasting." While the Church prays for the soul of the deceased, great respect is paid to the body. Orthodoxy believes the body of the Christian is sacred since it was the Temple of the Holy Spirit.The body will share also in the final restoration of all creation. The Funeral Service is continued at the Church, where the body is brought on the day of burial. Ideally, the Divine Liturgy is celebrated. After the Funeral Service, the congregation offers its Farewell to the deceased. The Trisagion Service is repeated at the graveside.

Death alters but does not destroy the bond of love and faith which exists among all the members of the Church. Orthodoxy believes that through our prayers, those "who have fallen asleep in the faith and the hope of the Resurrection" continue to have the opportunity to grow closer to God. Therefore, the Church prays constantly for her members who have died in Christ. We place our trust in the love of God and the power of mutual love and forgiveness. We pray that God will forgive the sins of the faithful departed and that He will receive them into the company of Saints in the heavenly Kingdom.

The Orthodox Church remembers the departed in the prayers of every Divine Liturgy. Besides this, there is a Memorial Service in which the Church also remembers the dead. According to tradition, the Memorial Service is offered on the third, ninth, and fortieth day after a death, as well as on the yearly anniversary of the death. In addition to these times, the Memorial Service is always offered for all the faithful departed on four "Saturdays of the souls." These are the two Saturdays preceding Great Lent, the first Saturday of Great Lent, and the Saturday before Pentecost. In the United States, the Service is also offered on Memorial Day. When the Memorial Service is offered, it is customary for the family of the deceased to bring a dish of boiled wheat to the Church. The boiled wheat is placed on a table in the center of the nave during the Service. The wheat, known as kollyva, is a symbol of the Resurrection. When speaking of the Resurrection, our Lord said: "Unless the grain of wheat falls into the earth and dies, it remains alone, but if it dies it bears much fruit." (John 12:24)

Epiphany, one of the oldest and most important Feast days of the Orthodox Church, commemorates the manifestation of the Holy Trinity, which took place at the Baptism of Christ in the Jordan River. Recognizing rich meaning in this event, Orthodoxy believes that when Christ was baptized, it not only marked the beginning of its public ministry and revealed the Trinity but also signified that the entire creation is destined to share in the glory of redemption in Christ. While Christ entered into the Jordan to be baptized, two things were happening: He was identifying Himself with the people He had come to save; and, He was identifying Himself with the whole of Creation which was represented by water. Through His baptism, the Lord revealed the value of the created world, and He redirected it toward its Creator. Creation is good, and it belongs to God.

The Great Blessing of Water is held on the eve of the Feast of the Epiphany and on the day itself, following the Divine Liturgy. The Blessing not only remembers the event of Our Lord's baptism and the revelation of the Holy Trinity but also expresses Orthodoxy's belief that creation is sanctified through Christ. The Blessing affirms that humanity and the created world, of which we are a part, were created to be filled with the sanctifying presence of God. After the solemn Blessing, the Holy Water is distributed to the faithful and is used to bless homes during the Epiphany season. When the faithful drink the "Epiphany Water," we are reminded of our own baptism. When the Church blesses an individual, or object, or event with the water, we are affirming that those baptized, their surroundings, and their responsibilities are sanctified through Christ and brought into the Kingdom of the Father through the Spirit. In addition to the Great Blessing of Water, there is a Lesser Blessing of Water service, which can take place any time. Usually, it is celebrated when a home is blessed, on the first day of the month, the beginning of the school year, and the beginning of new responsibilities.

The Blessing of Five Loaves of Bread is a brief service of thanksgiving through which we express our gratitude for all the blessings of life. Oil, wine, wheat, and the loaves of bread which are used in the service, are viewed as the most basic elements necessary for life. The Blessing reminds us of the miracle of the multiplication of the bread and fish by which Christ fed the multitude. This Blessing is usually offered during Vespers or after the Divine Liturgy on Feast days and other special occasions. After the Service, the bread is cut and distributed to the congregation.

The Orthodox Church worships God alone. Yet, she does offer veneration to individuals who have been important human instruments of God in the history of salvation. Among those so venerated is Mary, the Mother of God, the Theotokos. The Orthodox Church greatly honors Mary because she was chosen to give birth to the Son of God.

As one of the hymns declares: "By singing praise to your maternity, we exalt you as a spiritual temple, Theotokos. For the One Who dwelt within your womb, the Lord who holds all things in his hands, sanctified you, glorified you, and taught all to sing to you ... "The most beautiful and poetic service of the Orthodox Church in honor of Mary, the Theotokos, is the Akathist Hymn. The word akathist means without sitting. The congregation stands throughout the Service out of respect for Mary and her unique role in our salvation in Christ. The Akathist Hymn is chanted in four parts during the first four Fridays of Great Lent. On the fifth Friday, the entire Service is chanted.

The Service of Supplication: Paraklesis

The Service of Supplication, which is also known as Paraklesis, is one offered especially at times of sickness, temptation, or discouragement. The various prayers ask the Lord for guidance, personal strength, and healing. Many of the hymns and prayers are directed toward Mary, the Theotokos, and they ask for her assistance. Orthodoxy affirms that each of us, with Mary, the Saints, and the faithful departed, is united in a bond of faith and love in Christ. Therefore, just as in this life we can turn to each other for prayer, the Church believes that we can also turn to Mary - the human being closest to God - and ask her to pray to God for us.

This belief is expressed in the hymn which says: "O never failing protectress of Christians and their ever-present intercessor before the Creator; despise not the petitions or sinners who have recourse to you, by your goodness extend your help to us to call upon you with confidence. Has O Theotokos, to intercede for us, O who have always protected those who honor you." There are two forms of the Service of Supplication: the Greater and the Lesser. It is the Lesser Service of Supplication, which is briefer and the one most frequently offered. Both forms of the Service are offered during the first fourteen days of August, which precedes the Feast of the Dormition of the Theotokos celebrated on August 15th.